The Gujarat University was conceived in the nineteen twenties in the minds of public-spirited and learned men like Gandhiji, Sardar Patel, Acharya Anandshankar B. Dhruva, Dada Saheb Mavlankar, Kasturbhai Lalbhai and many others. However, the University could come into existence only after the achievement of independence. In 1949, the University was incorporated under the Gujarat University Act of the State Government ‘as a teaching and affiliating University.’ This was done as a measure of decentralisation and reorganization of University education in the then Province of Bombay.

Gujarat University has developed phenomenally in the last 57 years to be recognized as a premier University in the country today. It provides education in one of the widest range of disciplines to about two lakh students scattered over 235 colleges, 15 recognised institutions and 24 approved institutions. There are 34 Post-Graduate University departments and 221 P.G. Centres.

Its vision of Gujarat University to make a benchmark by affiliating OPTOMETRY as Bachelor in optometry and now even PG course – Master in Optometry at Nagar School of Optometry keeping in mind the utmost need of this paramedical professional Eye care stream for the society. 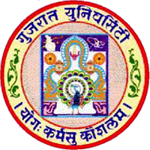